If I haven’t mentioned it already, I’m getting married soon. I live with my partner, we share the same bed, eat, bathe and sleep together every night. But… there’s one hidden secret about us that practically no one knows about (and I’m about to spill it a lot of strangers on the internet but hey ho…) there is another man in our relationship.

This man shares our bed every night, he sits with us on the sofa some evenings and both of us have been known to give him a cuddle when we’re feeling poorly. Technically, there’s another person in our relationship and his name is Ted.

Okay, calm down I’m not announcing that I’ve secretly been going on in some ménage à trois all this time but I am letting the cat out of the bag about something totally unusual about me. I’m twenty-six and I still sleep with a teddy bear, in fact both of us sleep with him in the same bed.

This Ted is something like soft toy number twenty-something because I’ve gone through so many of them since I was a child. I didn’t have a favourite teddy bear when I was little or anything like that but I did receive a giant stuffed toy somewhere about 2000 (when I would’ve been ten which is quite late to get into sleeping with teddies) because my first Ted was a medium-sized bear with 2000 printed on it’s paws for the millennium. Somehow one night I couldn’t sleep and I remember reaching for this Ted and I was instantly more comfortable, thus my relationship of sleeping with any teddy bear was born.

Writing this I sound like some sort of stuffed animal slag saying I’ve ‘slept’ with so many teddy bears in my life but honestly, I really only sleep with a stuffed animal for comfort. When I developed into a teenager I basically grew a huge pair of boobies overnight (no lie, I remember being dragged to Littlewoods for a bra fitting when I could hold a whole pencil case underneath each one) and having half my body propped up by something as I sleep is the only way I can feel comfortable enough to sleep properly. God help me when I start having babies because my optimum sleeping position is lying on my stomach with one hand under my pillow and another around a Ted. 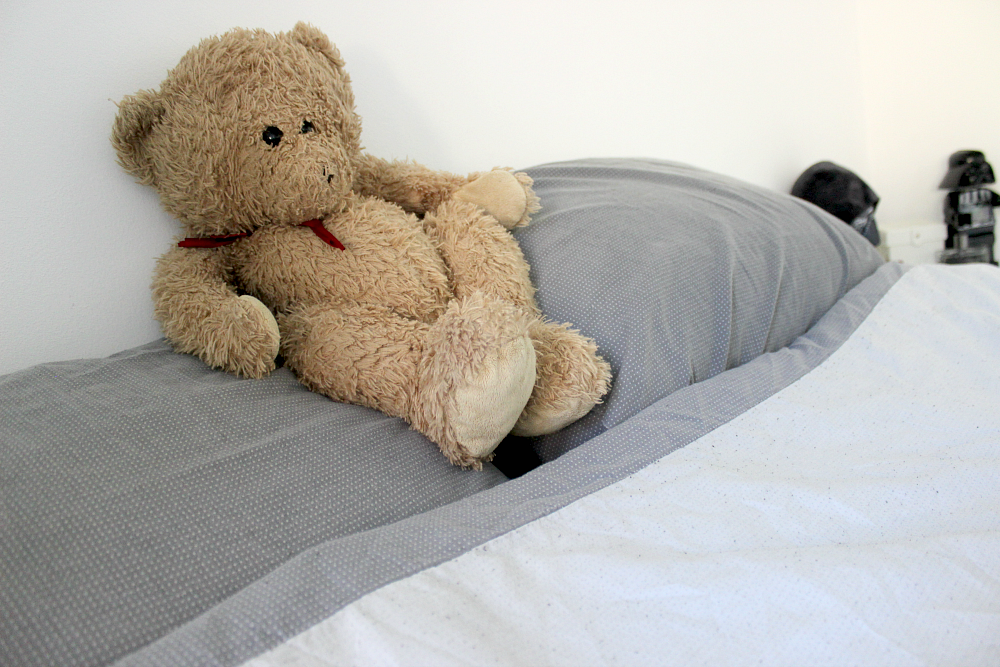 As I grew up I threw out a Ted every time they got a bit ratty but I kept one for the longest time that had a red knitted scarf and was a gift for my birthday. This was when I realised I’d developed atleast some sort of an attachment to this particular Ted because after a year of going without I finally took him with me for my second year of uni. I was in a long-term relationship at this time and when we moved in together my ex partner was so familiar with this Ted that he occasionally let him sit on the bed in our flat, but I was never allowed to sleep with him (because that would be weird right?).

When my ex and I broke up in 2013 this red-scarfed Ted soaked up all of my heartbreak and tears for atleast six months before I remember crawling into my Mum’s bed one morning and saying how that Ted made me feel worse every time I held him because he’d been with me throughout the entirely of a relationship that had now gone down the pan. Christmas was only a few months away and little me, as a twenty-something young woman had the now current Ted sitting under the tree for me Christmas morning from my parents. Apparently my Dad had gone all the way to a Toys R Us in Leicester after work one night to get me this Ted because my Mum knew how upset I was. I imagine my Dad recreating Jingle All The Way right before Christmas to get me a Ted replacement and scrambling over other Mums and Dads to the tills with the last one – awwh. 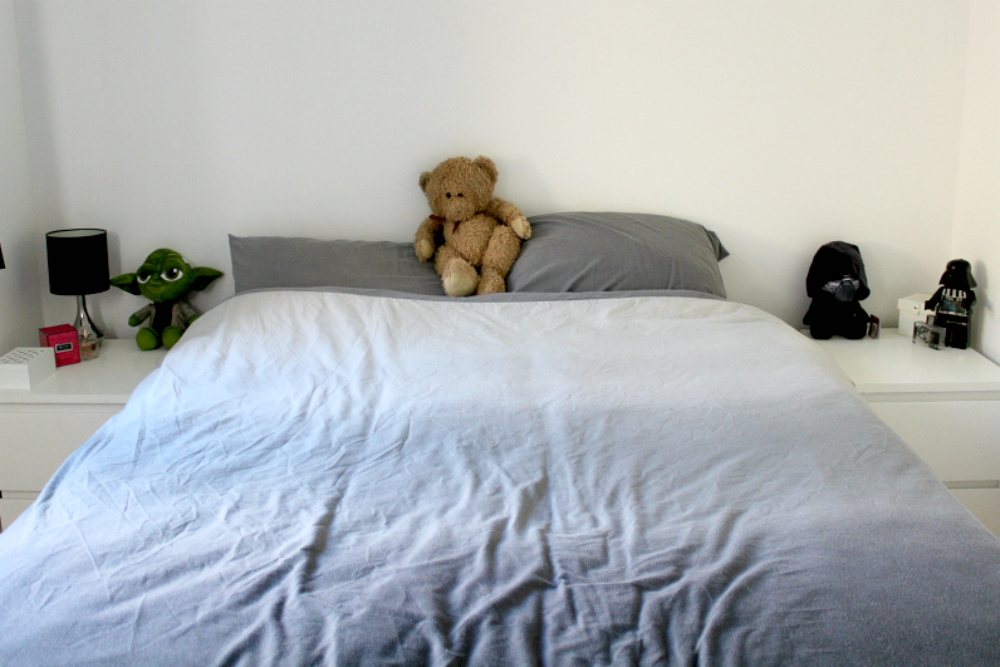 This Ted has been with me ever since and I’m happy to say that my husband-to-be has fully embraced him into our life. Ted sits in the middle of a bed taking pride of place  all day and after we give eachother a goodnight cuddle in the evenings Ted comes onto my side and I usually drift off the sleep with him tucked under my arm. Rick gets on with Ted so much so well that they frequently have ‘bro-time’ when he’s at home and I occasionally get messages with pictures of Ted dressed up in a pair of my knickers or something whilst I’m at work.

So, there you have it, that’s the other man in my life. This Ted is squashed and a little dirty so pretty soon he’s going to be stuffed into a pillowcase and put on a cycle in the washing machine and I know we’re both going to be extra careful we don’t damage him because he’s quite a big part of our lives really.

From sleeping with a teddy bear, If there’s anything I’ve learnt in all my years sleeping with teddy bears it’s this… find a man who’ll completely accept that at the age of twenty-six you will still sleep with a stuffed animal and will even cuddle him hisself when you’re not there.

Do you have a favourite toy you still sleep with? Let me know in the comments.