I don’t consider myself a blogger who bakes but I do prefer to have some home-making skills as a young woman setting up a home and soon to be wife. I developed a love for baking from a young age because my parents would sometimes bake a Victoria sponge cake together on a Sunday evening and I can distinctly remember the occasions where my dad would help my brother and I make fairy cakes at the weekends. Throughout moving away from home to go to university and as I’ve gotten older I’ve found myself really enjoying the methodical practise of following a recipe and seeing an end result. To me, there is nothing more exciting than seeing a mixture you’ve worked at rise in the oven and start to produce that cake-y smell that feels like home.

We love tea in this house and we have a whole cupboard stocked full of different flavours and somehow we ended up overstocked on Earl Grey teabags one weekend so I needed to find a use for them. Earl Grey isn’t my favourite type of tea because I find it a bit too fragrant for my tastes but when hunting for cupcake recipes online it got me thinking that actually those flowery flavours could work as a cake. I used a standard recipe as a basis for this one but I did my research and compared and contrasted a handful of different methods before I got a result I was happy with. I started with this Hummingbird Bakery recipe first and went from there. The instructions on that recipe are quite vague so I looked around and read up on my techniques because on the first bake my cake batter wasn’t even and came out still soggy after cooking.

Generally, I wanted a flavour that was strong enough to be able to taste and that would mix well with the lemon buttercream icing I wanted to pipe on top, but without being damp or wet to taste. Some recipes call for brewing the teabags in the milk but I actually found it better to brew for a full thirty minutes with the teabags just covered with boiled water instead and the result leaves the cake mixture with a more tea-like colour than without and moist enough to eat.

Want to make these at home yourself? Just follow these instructions… 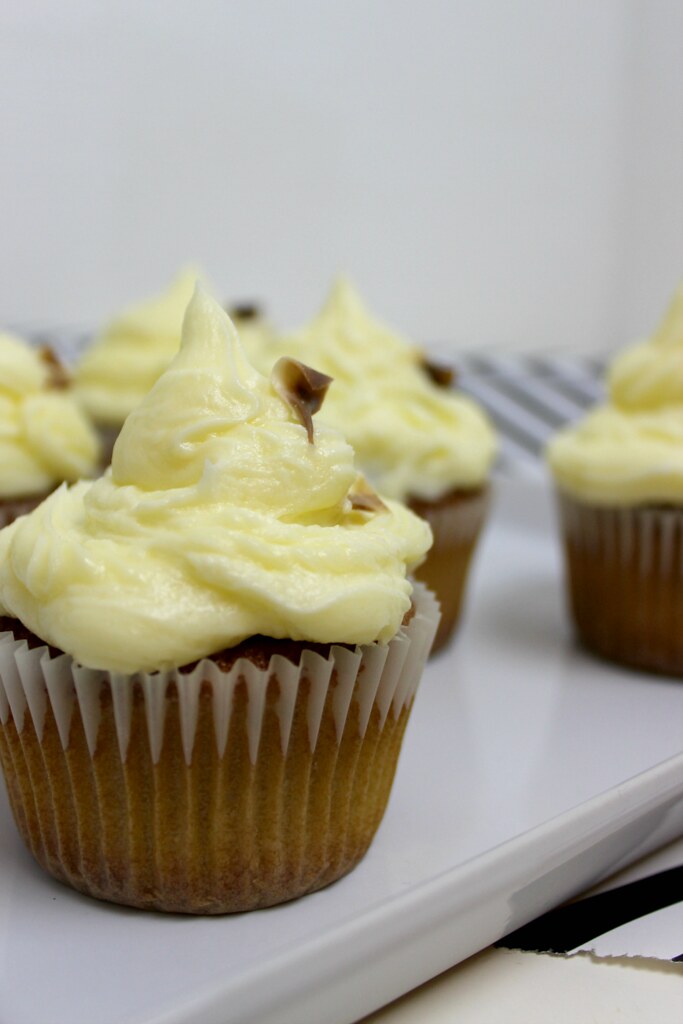 Method:
Boil the kettle and place the teabags in a mug or cup. Once the kettle has boiled pour just enough to cover the teabags or so that you’re confident they will brew and the tea leaves will be able to soak. I find the best results by leaving the teabags to brew for about 30-40 minutes for full flavour and it’s very important that the water will have gone cold by the time you need to use it for the cake mix.

At this point I pre-heat the oven at about 180 degrees. It really depends on your oven and the temperatures it cooks at on whereabouts you bake on this one but remember, we don’t want to burn these cakes we want them to rise and give enough time for the mixture to cook on the inside.

Put aside a muffin tray and fill each hole with a muffin case. Don’t use cake cases, you want the deep fill ones because your cake mix is going to rise in the oven.

Put the caster sugar, flour, baking power and salt into a bowl. I then cut up the room temperature butter into cubes and place into the mixture before washing my hands and diving in. Quite a few recipes call for this part to be mixed in a mixer or beaten by hand with a spoon but you want a mixture that looks like breadcrumbs when you’re done with this stage so I use the ‘rubbing in’ technique with my fingers. I usually work my way around the bowl until all of the butter lumps are nearly gone and then a do a whizz around with a spoon until I feel like the there’s no more distinguishable clumps left.

Pour the whole milk into a measuring jug and then break two eggs and whisk. Don’t go mad with your whisking you don’t want scrambled eggs or too much air in the mix, just so that the yolks are broken and the milk isn’t separated.

Add the brewed tea (sans teabags) into the jug until you’ve got a very weak looking tea colour. Imagine the colour of a really crap, milky cup of tea you’d serve to someone you don’t like – that’s the shade you want. Keep adding until you’re confident you’ve got a good shade going and the mixture will start to smell like tea too. Now, squeeze the leftover teabags into your jug so that you get all of that tea out from the teabags and whisk together. Be careful not to rip the teabags or you’ll get tea leaves all in the mixture.

Once you’ve given your liquid mixture a good old whisk and you’re confidence it’s all mixed you want to add it gradually to your bowl full of dry ingredients. I add about half of the jug and then mix in with a spoon by hand. Before you add all of your liquid mix you need to add the vanilla essence or flavouring. You need just a dash for flavour.

Add the rest of your liquid ingredients and work with a spoon until everything is blended together. Now, you want to swap out your spoon for that whisk from earlier and keep mixing the cake mixture until you get what looks like a batter.

When you’re ready grab your muffin tin and start filling the cases with the now wet mix. I used a table spoon and generally filled each case with two heaped spoonfuls at a time. This method gave me an even filling in each case and then I just added the leftovers to any cases that looked shallow compared to the others and voila – you’re ready to bake.

Give the bowl to someone you like to eat the leftover mix and then make then do the washing up whilst you put the cakes in the oven. Set your timer for 20 minutes and put your feet up. Don’t open the oven door before the 20 minutes because the cakes will sink in the middle and do pay attention to if they’re going a little too brown near the end of baking because that probably means they’re done.

Take the cakes out of the oven and place them on a cooling rack for about 20-30 minutes until no longer warm to the touch. If you tap them lightly they should sound hollow, that’s when you know you’ve made a good bake. For the buttercream measure out your ingredients and pour the icing sugar into the bowl first. Next you want to cut your butter into cubes because it will make it easier to combine with the caster sugar and place in with the bowl. Grab your spoon from earlier, washed clean or a new one and use it to work the two ingredients together. By the time you’re done you should have a mixture that is even but it’s okay if it’s still a little lumpy.

Take your lemon and slice it in half and then squeeze the juice out into a separate bowl so that you can pick out the seeds before pouring it into your mixture.

Once the lemon juice has been added stir the buttercream cream mixture until it looks firm and even. You need to get rid of all of those butter lumps but if it’s getting too much of a struggle to stir then add just a dash of whole milk to loosen it up a little. Don’t put in too much because you’ll a) defuse the lemon flavour and b) make the buttercream too runny.

Your buttercream topping is now ready! Grab a piping bag and hit up Pinterest for some icing inspiration and tips and go to town on those now cool cakes. Truth be told I’m crap at icing but I still gave it a go for these cakes. Learning from experience I think I need to look at some different tips for my piping bags because the ones I picked up in a set from Poundland weren’t the best but hey, they were only a quid!

I topped a few of my cakes each with a small chocolate curl that came pre-packaged but these cupcakes taste just as good without.

Have you tried a recipe like this before? What do you think of my attempt? Let me know in the comments.