Don’t worry you’re not that behind on your blog posts feeds, I’m just still behind on posting up my reviews.

It feel like I only wrote about what I read on January last week (heh) but I’ve still got two other months to get through before I’m caught up and I thought it was about time I started writing about what I managed to get through in February. My reading list is still smaller than it was last year but I picked a real variety this month – which figures because this was the month I moved house!

But still, onto what I managed to get through between packing tape and bubble wrap: 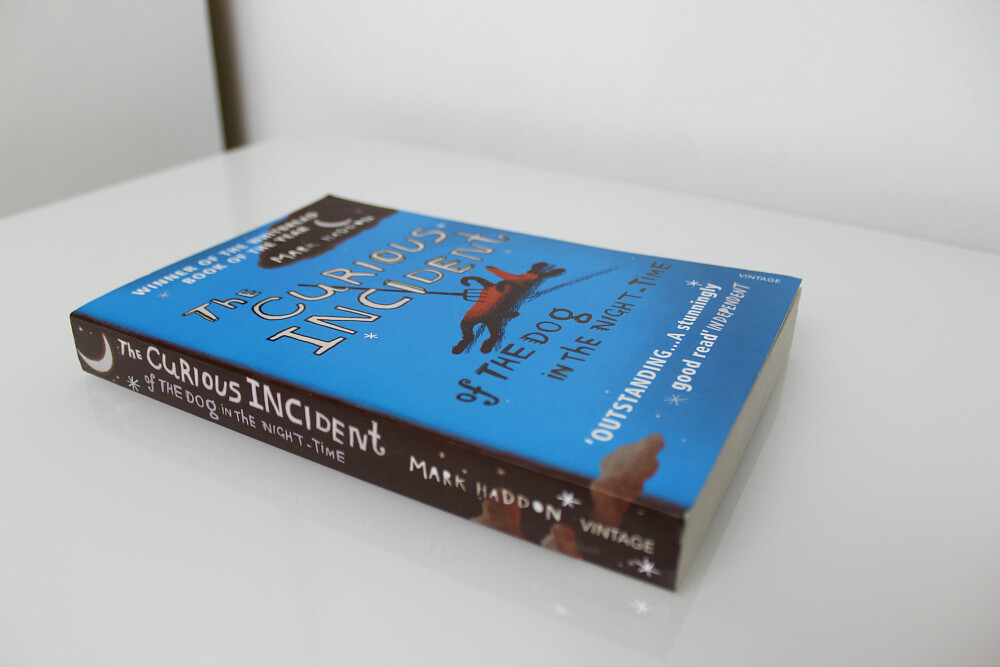 Everyone, I mean everyone who saw me reading this book said it was a good read.

This is one of those books that you would’ve heard about in school (if you’re as old as me, which is mid-twenties) and some of your classmates will have studied. Why did it get so much recognition in schools at the time of release? Well it follows the world of an autistic main character called Christopher as he tries to find out why his neighbours dog was killed. As you can guess this book is written from Christopher’s perspective and really goes into the depths of a young man with a mind riddled with higher-intelligence levels yet a lower understanding of the social conventions we take for granted.

I remember thinking at the time in my little youngling mind that it doesn’t sound that interesting for a book and as my intense dislike for crime fiction started at even a young age so I avoided reading it at all costs. Adult me however saw it in a music shop for a £1 on New Year’s Day and decided to leaf through a few chapters for the sake of needing something to read on the bus home.

You could count this as a classic but I don’t really agree. Yes the spotlight on a developmental illness will have done wonders to help people understand how this can affect an individual but I still found holes in the plot that really annoyed me. Christopher’s family really got on my nerves at times, especially his Mother but that goes to show that the reason she left him in the first place was because she couldn’t cope with him. Even still his Father shows some serious anger issues that you’d think by now he would’ve learn to control or atleast get some help to make sure he was not a danger to his son.

I’m still a bit ‘meh’ about this book because even though it challenges conventions and give an insight into autism I didn’t feel like I gained anything from reading it. I think maybe I’m too old to have felt the impact by now?

Even still, it’s not exactly like I wouldn’t recommend it to anyone because there is a reason it has been so popular and why there is even a very successful play written based on this book. Six of Crows by Leigh Bardugo

I came across Six of Crows at a time when I craving an action-adventure novel and it did not disappoint!

Okay, so the book is quite long and as soon as it was checked out of the library and in my back-up I had the intense sense that it was going to take me a long time to finish reading this with my track record. Turns out that even though it take me some time I still managed to read this at a comfortable pace and really enjoy it – there were hardly any points that the story dragged on and I felt bored at all which was a nice change for a book of this genre. The blurb reads:

“Ketterdam: a bustling hub of international trade where anything can be had for the right price—and no one knows that better than criminal prodigy Kaz Brekker. Kaz is offered a chance at a deadly heist that could make him rich beyond his wildest dreams. But he can’t pull it off alone. Kaz’s crew are the only ones who might stand between the world and destruction—if they don’t kill each other first.”

Interesting, exciting and humorous in some places this book had it all for me. The action, the mystery and even a love/hate romance. It reminded of something in particular at the time of reading that I can’t quite put my finger on now but thinking back somehow in my head I keep thinking of pirates even though only some of the book takes place at sea. There are religious themes that run throughout this novel that you can tell have been fully crafted and researched by the author that really make the difference. I think that this book is placed in a universe that has already been used for another series of books by the author but is a standalone series so you don’t have to read the others to understand the plot.

I will be keeping my eye out for the next book in the series and checking that out to read as well, this is certainly one of those first books that gives such strength to a world and it’s characters that you’ll want to carry on reading the next installments. I have no shame in admitting that reading this book gave me an intense craving to go to Ikea in the early evening (when it was dark) just to experience being scared silly after reading this book. However, rather than come back with that craved-for adrenaline rush of feeling like someone is watching you as your browse the expanse of carefully co-ordinated showrooms and try not to get lost – or find your way into the cafe three times by accident – I came home with two kitchen table chairs and three plastic storage boxes because I was actually moving house at the time.

Horrorstör is set in a blatant Ikea rip-off department store called Orsk that is haunted. Very haunted. A group of colleagues spend the night staking out the massive store after a number of disturbing events take place and end up involved in the hauntings that have been plaguing the site. Basically – this is written and illustrated like an Ikea catalogue with a scary backstory.

I got this as a Christmas gift and got about reading it straight the way because I had heard so many great things about it. Each chapter is headlined with a piece of Orsk furniture instructions and as the story moves on – these shift and change to to become torture items rather than standard items of furniture.

It’s creepy, funny and a total joy to leaf through. I will be keeping this as a coffee-table book for years to come to delight and confuse guests in my home.

Have you read any of the books in my list for this month? Let me know in the comments.